After 3 late nights tweeting on Australian time, we have the final keynote of WPC16… (if you want to watch the keynotes yourself then they are available here https://partner.microsoft.com/en-US/wpc/wpc-2016-vision-keynotes)

On previous days I have done a single all up summary, but today I’m going to break out Brad Smith as I feel it just needs to stand alone.

His keynote was all about showing that Microsoft has a higher calling than simply selling “tech stuff” and that they can be trusted with the big social as well as technical issues that we are facing across the world.

This is a huge ask, but I am left convinced and it would appear others are as well (Facebook as an example).

He took us on a journey about change and the role we all have to play in this.  He started with a book by Klaus Schwab “The Fourth Industrial Revolution” (https://www.weforum.org/pages/the-fourth-industrial-revolution-by-klaus-schwab/).

We are entering the 4th Industrial revolution and it is powered by the cloud. 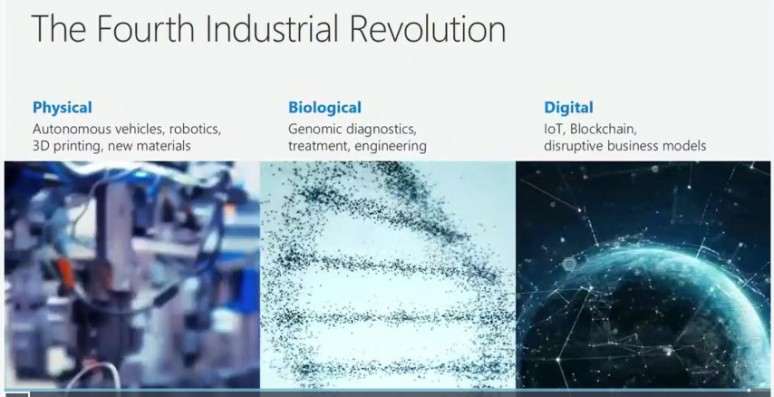 He used 2 images from New York to show how quickly change can happen. The first taken in 1905 show an intersection with horses and trams (no cars).  Apparently at this time 25% of all US agricultural output was used to feed horses. 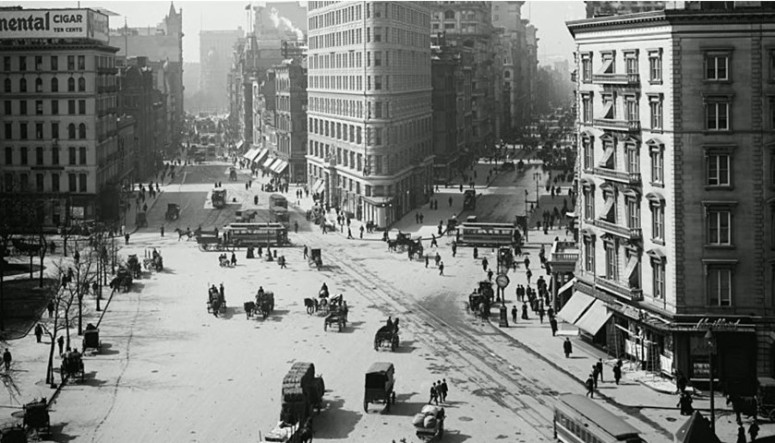 The second picture of the same intersection was taken 20 years later in 1925, this time with no horses to be seen, but the arrival of the car.  What will be our experiences over the coming 20 years? 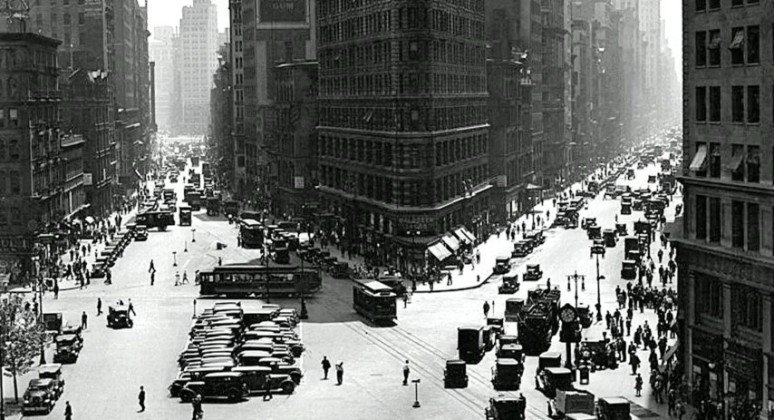 Toni Townes-Whitley (Corporate VP, Worldwide Public Sector) joined Brad on stage and talked about how Microsoft is supporting the commitment of 193 leaders at the UN General Council in September 2015 to address 17 critical societal issues (http://www.un.org/sustainabledevelopment/sustainable-development-goals/) 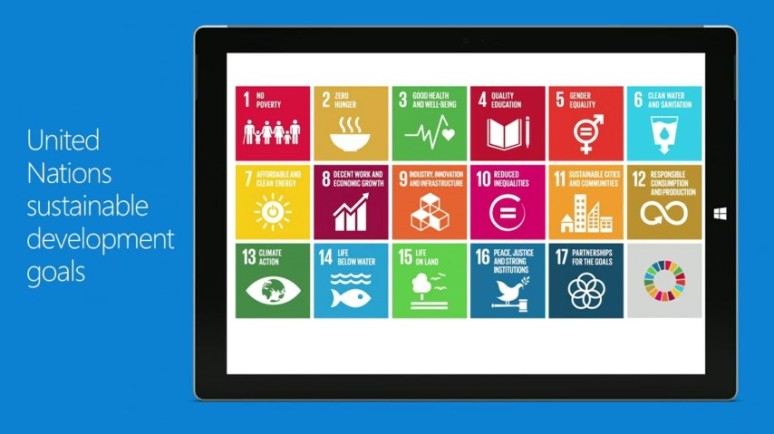 Brad talked a lot about a how Microsoft are taking on nation states to challenge and defend the broadest of security and privacy issues.  He asserted that:

This was backed up by examples of a number of challenges Microsoft have made to the US government.  One of these from mid-2016 involved looking at the search warrants Microsoft had received from the US government and found that 2,000 had a secrecy order that prevent Microsoft from letting the customer know that their emails had been obtained by the government with NO time limit.

We have gone to court to say that that is not just unconstitutional that’s not the future we want to build. 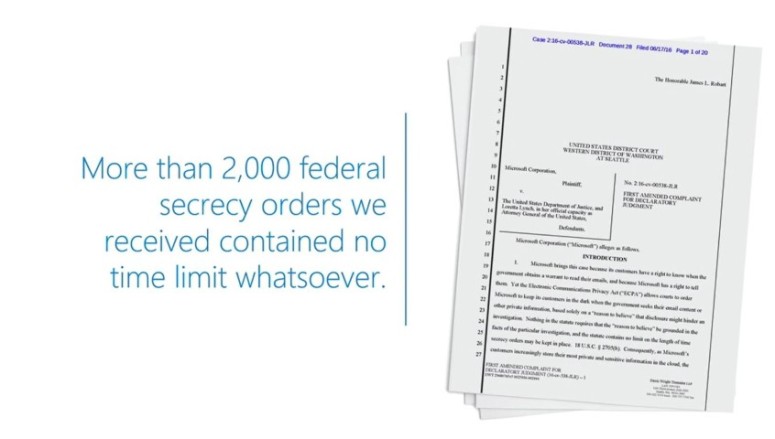 I had a dig around and found a great video of Brad providing opening remarks as part of testimony in February 2016 before a U.S. House Judiciary Committee hearing titled International Conflicts of Law Concerning Cross Border Data Flow and Law Enforcement Requests.

This all roles up into a declaration of Trust and Privacy Principles that drive Microsoft’s own behaviour: 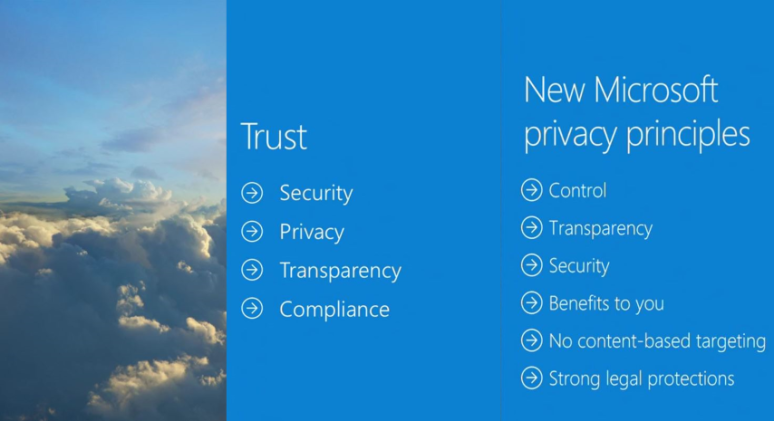 If solving the world’s legal problems wasn’t enough we are now onto protecting the planet – I don’t say this in jest, more in awe at the scope of the ambitions that he is representing on behalf of Microsoft.

We will be transparent with the world…44% of the electricity consumed by our DCs comes from solar, hydro or wind-power. Within 2 years we will pass the 50% threshold and by early in the next decade will pass the 60% threshold. That’s the kind of future we need to build.

Change brings anxiety and this brings responsibility.  He re-enforced the potentially huge social impacts of change by posing the following question: 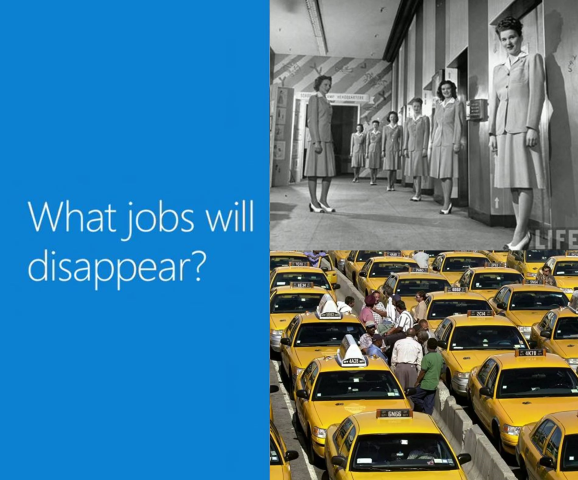 After a bunch of stats and examples about how we all need to work together the create opportunities and drive change for the good of all he landed with the killer quote:

He referenced Microsoft’s philanthropic activities ($1bn of cloud services to non-profits – http://www.zdnet.com/article/microsoft-wants-to-help-solve-the-worlds-unsolvable-problems-with-1bn-cloud-donation/) and Satya Nadella’s announcement at the World Economic Forum in Jan 2016 about the programs to ensure the Public Cloud serves the Public Good (http://blogs.microsoft.com/blog/2016/01/19/why-we-need-a-public-cloud-for-the-public-good/#sm.000007mftkdux0ejtzbmwxptlh15f).

We need to ensure that opportunity reaches every country 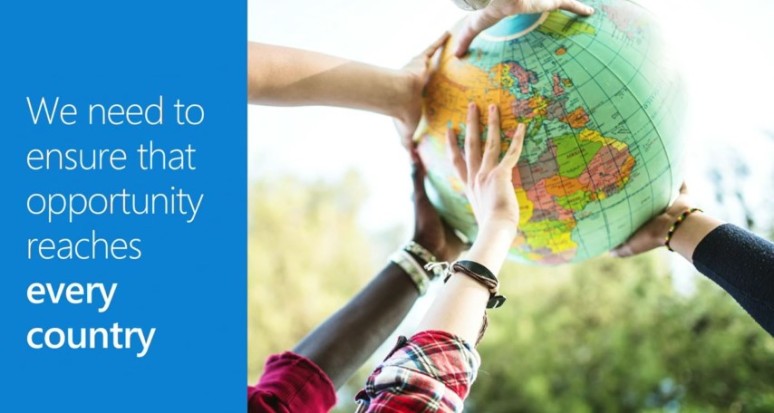